Where Do You Fit into a Web Development Team?

There are 3 distinctive sections of a web development team: design, development and system administration. With very small teams, a lot of these overlap, but most teams can then be split into their own roles. Go to any job site and these are the descriptions you will see, each asking for the same key skills and requirements. The problem then, is specificity.

What are you really looking for?

Something I stumbled across whilst searching for a job this summer was how repetitive job listings were. Each post included the same required skills and provided very little detail as to what the employer really wanted. A shocking number of listings asked for every skill under the sun. Others were less informative and simply asked for strong HTML and CSS skills. Bear in mind all the jobs I am describing were listed as front-end developer.

This created a dilemma - do I apply for all jobs till I find out more or only apply for the ones that seem to know what they want.

I chose the later.

So where do you fit in?

Personally, I love to work with front and backend technologies, placing me in neither of the camps. And I'm not the only one. More and more people and learning to dabble with backend technology such as PHP and Ruby. The number of resources available for PHP is astounding so whatever kind of developer you are, you have no excuse to not learn something new.

I found it quite annoying when my new work colleagues (through not fault of their own) thought I would be an excellent designer and have poor JavaScript knowledge because I was a frontend developer. Actually, that's the complete opposite. I'm pretty poor at designing and know a lot about JavaScript. This confusion led me to try investigate further.

The solution to this problem is to be more granular and the deciding factor seems to be how much JavaScript you know! 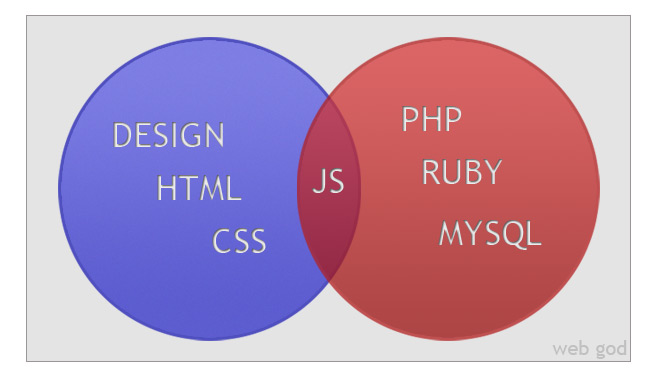 With the introduction of Node.js, and a growing number of single page JavaScript applications built on top of MVC frameworks, frontend developers are being spread over a larger area of technologies, moving them away from primarily doing HTML/CSS/jQuery.

The solution appears to be redefining the role of the frontend developer. Here is a list of the various job roles and what I think they include:

Expert design and Photoshop/Illustrator skills. Can do basic HTML and CSS to create mockups

Can use Photoshop/Illustrator. Expert with HTML/CSS/jQuery. Good knowledge of PHP/Ruby and databases (MySQL etc)

Good at HTML/CSS/JavaScript. Expert knowledge of PHP/Ruby/C#/Python (which ever language you want). Strong knowledge of databases.

With each of these, it clearly outlines what their expertise is within the team and what they're secondary skills are.

So the above list is missing one position which I chose not to add. That's JavaScript Developer. As I mentioned above, JavaScript is becoming used in all aspects of web development with Node.js helping move it to the server. Firefox OS and Windows 8 apps allow you to build in HTML, CSS and JavaScript (along with applications such as PhoneGap for other devices).

It is becoming to got too language for all developers, and I do think in future the role will become more prominent than it is now.