Cast your mind back one year. What were you doing? Where were you? I was starting my final year of University, and with masses of time to kill, I built Slidorion - a jQuery accordion/slider combo. It's amazing how much can happen in a year, and the progress of Slidorion has stunned me. A few days ago I logged into Google Analytics to have a look at some of the stats over the past year. Here's what I found...

How Many People Seen It? 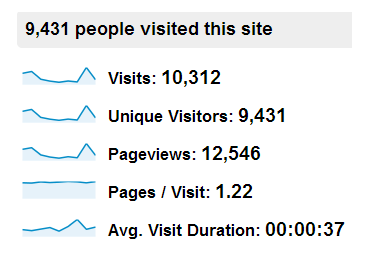 The simple answer... way more than I ever expected!! The total number of visitors as of today (28/10/2012) is 274,358!! The first week saw just over 9000 visitors come to the site with the first few days being the most popular. This was helped massively by a tweet from Smashing Magazine, which incidentally crashed my server for a good 15 minutes - whoops.

The initial boom came as a huge surprise. It really showed me the power of social networks and blogs when you're trying to get something you've built out to people.

It's safe to assume that the majority of people coming to the site are in the web industry, so I found it very interesting when looking at the browser stats over the past year:

What I found more interesting was the version of IE that people were using. I thought that IE8 might have the majority here as people would be checking if the plugin worked as it should on there. Amazingly, only 12% of the IE visitors used 8 or below, which begs the question, do people check that plugins work in lower versions of IE before using it? There's nothing on the site to suggest that it works with them so I would assume a lot of people don't check.

Where Are They All Coming From?

Here, there and everywhere!! The list of countries is insane!

The inclusion of Italy in the top 5 really surprised me. Some of the larger sites in France had blogged about the plugin so traffic from there was high, but I would have thought the US and the UK (6th) would have been higher on the list. Maybe it shows that these countries have more people working in the web industry that we do.

Some of the weirdest countries:

I find it amazing that people in these countries far away have viewed some work that I created! I haven't even heard of 3 of those!

Some Words of Advice

There are a few things I regret looking back and somethings that I would advise you to look out for.

Calling my plugin Slidorion (Slider + Accordion) was the worst mistake ever!! Nobody knew how to pronounce it and it sounds kinda crap. No matter how big or small a product might be, give it a good name because it will come round to bite you in the ass.

Be prepared to support it

The amount of support questions I've had over the past year has been crazy. In the first month I had loads of requests for new features, bugs that needed fixing and holes that need plugging! I've put this down to a lack of user testing. If I was going to release something similar now, I would have people beta test it properly so when it is released, all the messages/comnments are about new features people would like to see.